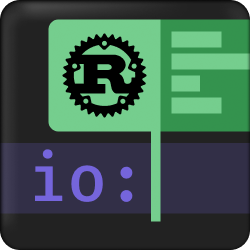 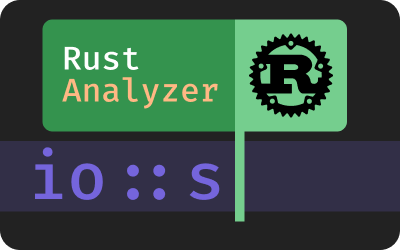 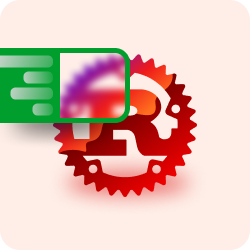 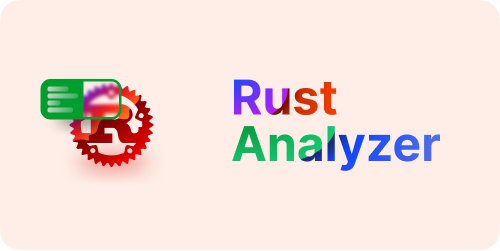 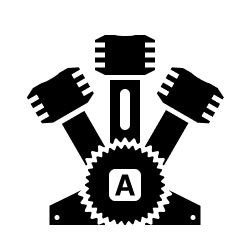 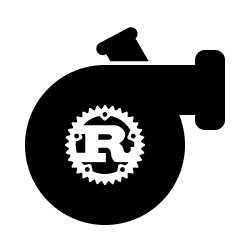 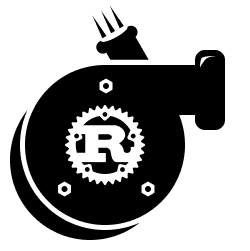 a uses "JetBrains Mono" and b uses "Space Mono" 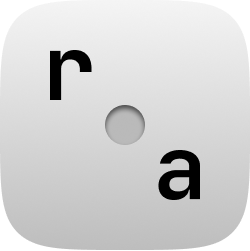 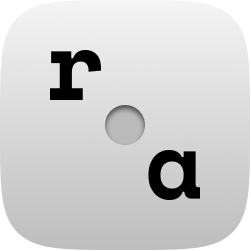 JUDGE THE LOGOS BY LOOKING THEM AT A DISTANCE

The messaging of variant 2 seems off: Surely we want to imply that using Rust Analyzer makes things clearer, but in the graphic it makes things blurrier instead.

Also, can you explain what benefits we should expect to get by replacing the logo? Is the current one problematic in some way?

Community itself want it. However, your suggestions are equally valuable.

Community itself want it. However, your suggestions are equally valuable.

That doesn't answer my question. Until we have a good idea of what qualities of the project we wish a new logo to emphasize, it's impossible to fairly evaluate candidates. The discussion of what we want to get out of the logo redesign needs to happen before discussing any concrete proposals.

Thanks @electrolyte-orb for pushing on with this. I don't know much about design, but I just want to jot down a couple of constraints:

Others from the team (or who know more about design) might be able to articulate these better.

Moving on to my thoughts on the four proposals:

Thanks for reviewing my crap. I personally didn't like the latter two variants(BTW, last one is a turbocharger

But, my problem for that io is that it's a small and rusty thing, if you put something like rust in there, I doubt that it will fill the square. I need some way to really convey the “autocomplete” metaphor.

Reply for any subsequent discussion.

Does the community want/need this? I see a single comment with 2 reactions, I get the impression most users don't have an issue with the current branding. As mentioned already, I personally don't see what issues there are to solve with the current logo.

It's simple and boring, and there's absolutely nothing wrong with that imo. We're an IDE tool, not a social media company - if you must modernise it, stick some rounded corners on the "analyzer" box and call it a day

1 and 2 seem too busy, and conflict with the minimal, monochrome aesthetic of other Rust ecosystem staples.

3 seems misproportional, when considering it's use in icons, e.g., in vscode as @lnicola mentioned. However the engine is certainly appropriate, rust-analyzer /is/ an IDE engine

Variant 4 appears to be a cannon ?

I was seeing a turbocharger, and so far I'm enjoying it the most. Implying that it improves your performance/output as a developer. But I like turbocharged engines, so I'm biased

Variants 1 and 2 look too busy for my taste. A logo must be easily recognizable, and the more detailed a logo is, the more difficult is it to remember. Variant 4 is very nice, but I'm worried that many people will not realize that this is a Turbocharger because they have never seen a Turbocharger in real life. If it is confused for a cannon, that would be bad messaging.

I'm the one who designed the current logo, see this issue for context. I'm not entirely happy with the current logo and would be happy if it's replaced with a better logo, so I appreciate your effort! I also like that you experimented with some color, although variation 2 is a bit over the top.

Consensus in the reddit thread seems to be in favor of the current logo over these proposals. I also personally like the current logo (although I didn't even realize there was one until today).

Reddit seems to be in favor of the old logo.

But in the meantime, I've gone ahead with Turbocharger design.

Any misalignment and disproportions will be rectified.

I think this iOS-like design would be familiar 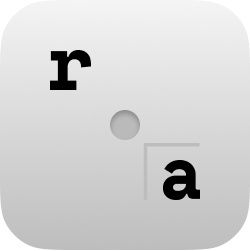 Variant 3: I think logos based on internal combustion engine metaphors will age poorly, both because of the shift to electric vehicles and because of climate change.

So of the three options provided, maybe 1b), but I also think it's pretty busy. I second @ 2e71828's advice here too and recommend getting the goals of the redesign written down before evaluating concrete proposals.

If you already did the work to downscale the logo, why not post that version here as well so that we can judge for ourselves?

My suggestion to you at this point is to put your proposal into Rust’s standard RFC template. Most of the questions it asks are broadly relevant for any major change, and it’s a format that the people here are used to working with and discussing (cf. any thread marked “Pre-RFC”).

Yes, but, I'm not even sure that we (well, I) would make it that far. Most are just fine with the old logo.

I have mocked it, in VSCode Extensions 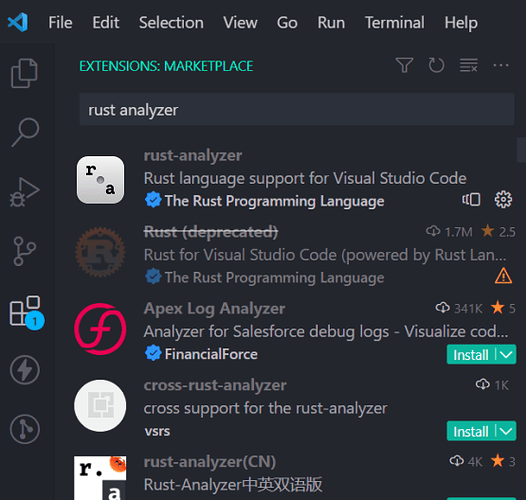 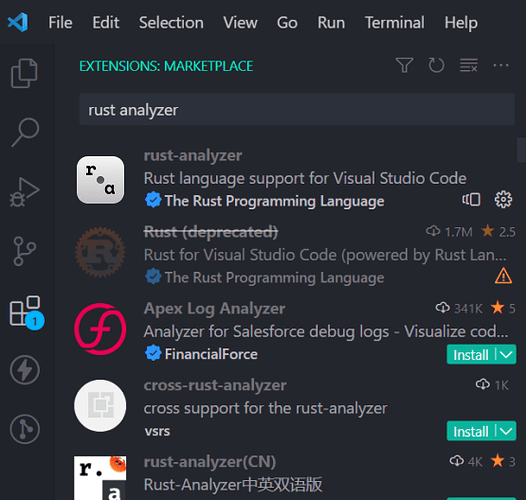 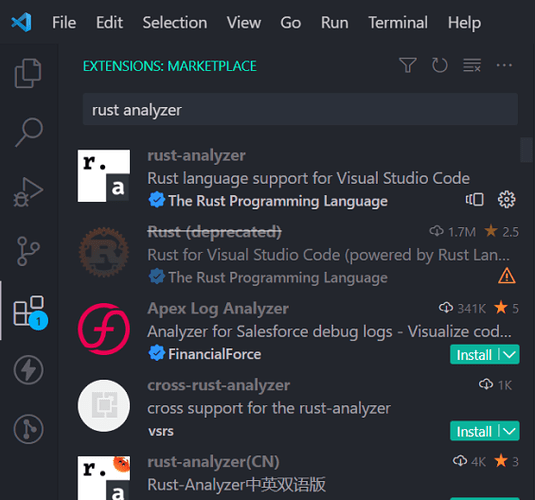 Most are just fine with the old logo.

Most people are just fine with the status quo for every change proposal. If you just put a solution out there and hope people flock to it, you’ll be disappointed most of the time. To get any change through, you have to not only propose a solution but also show that:

The RFC template is designed to help you make these arguments, and also to help interested readers verify that you’ve addressed them sufficiently.

Yes, but how would I know that my design is at least on par with the design of the current logo? Till now, it's a huge mess. A turbo seems a cannon, magnification looks terrible, some like colors, some prefer minimalism, some like total monochromes. Most are almost fine with the current design and I think in some days this thread would be the same as a thousand other threads out on the internet, that blip in and out of existence. And even though, it's clearly mentioned This is experimental, most are just saying the engine is misaligned and disproportion-ed.

I'll be honest. I didn't even realize that rust-analyzer had a logo at all. I never see it. Probably the only time I even have is when installing the extension, which is a one-off thing. If you had asked me what it looked like, I wouldn't have been able to tell you.

So I don't see the need for a new logo, because how often are people really seeing it?

Yes, but how would I know that my design is at least on par with the design of the current logo?

This is why I suggested specifying the goals of the redesign explicitly. Without a standard to measure against, however subjective, this sort of exercise will always devolve into a popularity contest. And those rarely end in a consensus.

With these in hand, you can then describe how the current logo falls short of these goals, and also how the various design decisions you made support them. For (1), you can look for common elements in the graphic design of other things in the Rust ecosystem (Rust itself, Cargo, crates.io, TRPL book, etc.) and show how your proposal aligns with them better than the old logo. For (2), you’d do the same but with other software engineering tools. And so on for the rest.