How to audit and improve Rust crates eco-system for security in general?

the development of Rust as a modern language is outstanding. So many developers love it because they can get things done in Rust. Also a lot of focus is on performance and (memory) safety, but still it's hard for Rust especially in the web to become a first choice technology.

Companies are afraid of security issues. In general not only because of e.g. undefined behavior memory stuff, but because of I would call it "lacking eco-system maturity". For them there is almost no security benefit for a safe(r) memory model than so called "safe Rust code" w/o memory issues may just open a backdoor because it's a simple bug.

I thought I've read something about a working group for crate security, but I can't find it anymore. All in all I'm interested in plans for the next steps towards how Rust could be more widely used at companies so they also start contribution and improve crates or getting into the Rust community at all.

Right now it's like a catch-22 situation: how should something become mature if not commonly used? At least it's hard to discuss why sticking to Rust is a better option than other technologies, if performance is not a big deal. As a developer I would always vote for Rust, but I understand companies e.g. stay with Java and Spring than Rust and rocket. How can we fix this or do we want to fix this

I thought I've read something about a working group for crate security, but I can't find it anymore.

Do you mean the Rust Secure Code Working Group?

https://github.com/RustSec is a separate GitHub organization but run by the same people.

At least I've also found them, but for me it looks like they are more focused on lower level unsafe Rust security subjects, while I would like to see some kind of foundation that reviews and monitors some of the "well-known" crates. Not quite sure if it's case for this wg.

There is a tool/community that aims to monitor crates for safety and quality:

I would like to see some kind of foundation that reviews and monitors some of the "well-known" crates. Not quite sure if it's case for this wg.

Indeed no; I don't think they have enough time (or personnel) to devote for that. The closest other relevant WGs or subteams I think are the Crates.io team, which ends up handling the occasional malicious crate, and the Security Response WG, which (in addition to such malicious crates, apparently) handles security of official Rust products (rustc, Cargo, the standard library, ...) — but I don't think either sounds like what you want.

I wonder whether "The Update Framework" ("TUF") would be relevant to you:

The fun thing about packaging systems with central package directories is the ce…ntral package directories have this annoying tendency to be compromised. There have been a few such notable compromises in recent history, such as RubyGems and npm. Fortunately no serious problems resulted in either of these attacks they were both detected early, but a more sinister attack could go undetected, poisoning the package repository and spreading malware. One way to stop this is to move the source of authority for the integrity of packages from the package repository to the developers of packages. However, managing keys is hard, and many people simply won't want to do this. Furthermore, you have to worry about how to retrofit the existing packages into this model if your packaging system didn't launch with developer-managed keys from day one (which Cargo didn't) There's a system that solves all these problems called The Update Framework (TUF), collaboratively developed by both Tor developers and academics: http://theupdateframework.com/ The Update Framework allows developers to opt-in to managing their own keys. High profile packages can be signed by developers: specifically, TUF supports "threshold signatures" so k / n developers are needed to countersign a package in order for it to count as released. However, not everyone is forced to manage their own keys: people who don't want to can have their packages signed by the package repository instead. TUF secures developer keys by having developers who own "unclaimed" packages request to associate some signing keys with them. A system administrator then periodically (once a week or other tolerable time interval) signs these developer keys with an offline key (or keys, TUF uses threshold signatures everywhere). At this point, these packages move from "unclaimed" to "claimed", and become what TUF calls a "delegated target": the developers, not the packaging system, become the source of truth for that particular package. For more information, I suggest you read their paper "Survivable Key Compromise In Software Update Systems": http://freehaven.net/~arma/tuf-ccs2010.pdf I think a system like TUF can easily be retrofitted to Cargo as it exists today. There are a few changes I might recommend before you try to add TUF, but I think you're off to a good start. However, if you did want to use something like TUF, it does figure into the overall AuthZ model of the system. There are a number of outstanding AuthZ issues / suggestions like #48 and #58. If you do want to integrate a system like TUF where developers manage their own keys, it will definitely influence whatever AuthZ model you adopt, because TUF moves things like authorization and integrity partly to the client. I worked on adding TUF to RubyGems at one point and liked it, although we never finished. The people behind it worked on adding it to PyPI, and were very helpful with our efforts to add it to RubyGems.

I think the best match for my search is cargo-crev. If I read it correctly they code-review cargo crates and create reports. I'll try to find out how it works and how I can maybe contribute as well.

@daaitch speaking as one of the leads of the Secure Code WG, we don't do regular audits of high-profile crates, beyond the work in the Safety Dance project, but something like that would be quite interesting if someone were willing to spearhead it.

If someone wanted to start a general code review project for high-profile crates within the WG, I'm sure we'd have quite a few interested contributors who could create audits to submit to something like cargo-crev.

Perhaps something like a "crate of the month" club where we have several people look at the latest releases of high-profile crates?

Perhaps something like a "crate of the month" club where we have several people look at the latest releases of high-profile crates?

It might also be nice to encourage cargo-crev reviewers with the capacity to give a review to crates of the week.

Some sort of dashboard for "crates which want for reviews" could also be interesting; weight crates by factors including lib.rs rank, rdeps from reviewed crates, confidence in existing reviews, etc. You could even potentially gamify it by (opt in) ranking reviewers by some combination of reviews done, thoroughness of reviews, impact of reviews (using the previous), and trust in reviews (via the existing web of trust model to weight how much ranked reviewers trust other ranked reviewers).

And it will become even more complicated than just having like a community make code-reviews. Regarding the reviews, reviewers and the "trust-levels" there are different perspectives of security like one crate might be perfectly okay for web development, but bad for critical systems development.

Security is often very focused on attacks or in systems languages undefined behavior overflow/timing attacks and so on, which is perfectly fine, but it actually starts much earlier I think. Someone using a library incorrectly due to bad documentation lead to DoS, because a panic hasn't been documented or it doesn't make sense at all to panic for the library is maybe more likely for a security issue.

I thought of a crate review roadmap, for example:

So depending on the needs someone could only allow stage-3 or use a web-crate as primary server implementation, or stage-4 system-crate for linux kernel development.

You should check out criticality score, a project from the Open Source Security Foundation for identifying critical repositories to prioritize when working on software supply chain security.

Evaluating for other people's abstract use cases is really hard. You're better off doing secure code auditing looking for common CWEs. So far, ANSSI-FR has their own Rust secure coding guidelines. If you're auditing unsafe Rust, then Miri runs (where possible) and an expectation that unsafe be justified with explanations in the code would help as well.

Another crate possibly relevant, which I just saw from watching cargo-deny, is 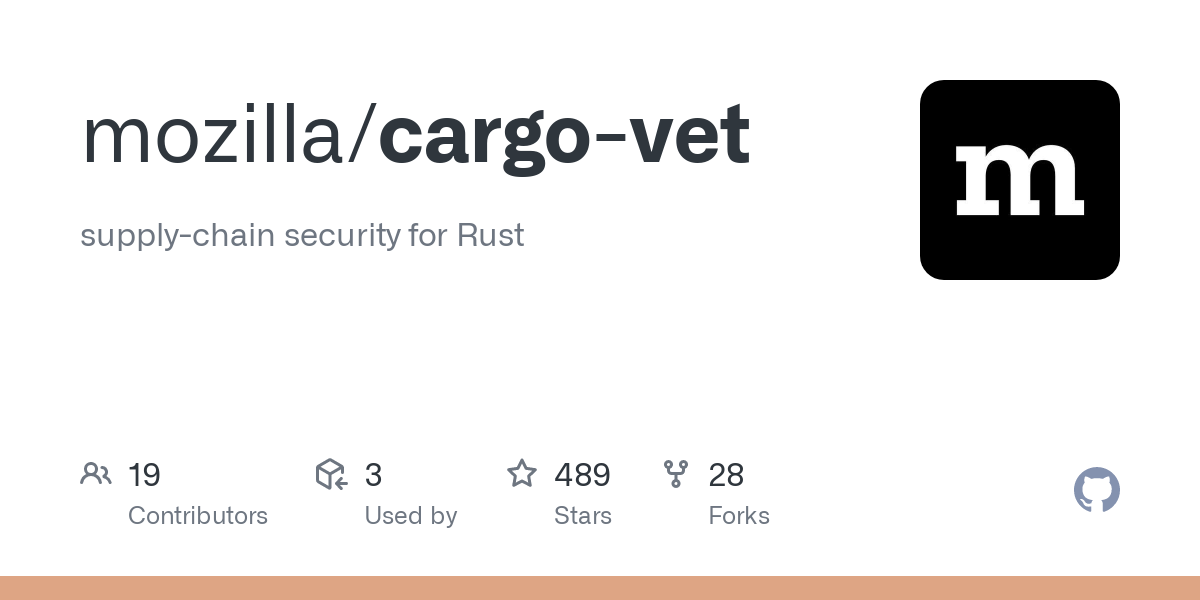 supply-chain security for Rust. Contribute to mozilla/cargo-vet development by creating an account on GitHub.

LWN coverage and discussion of cargo-vet:

Modern language environments make it easy to discover and incorporate externally written libraries into a program. These same mechanisms can also make it easy to inadvertently incorporate security vulnerabilities or overtly malicious code, which is...

In the context of the RustSec project, we've had some complaints about our use of CVSS as vulnerability scores for libraries, stemming from the larger problem that CVSS is widely acknowledged as being poorly suited for libraries.

There has been some interest in using the Exploit Prediction Scoring System (EPSS) as an alternative method of estimating severity which is more applicable to the library use case:

Here is a related Rust project: 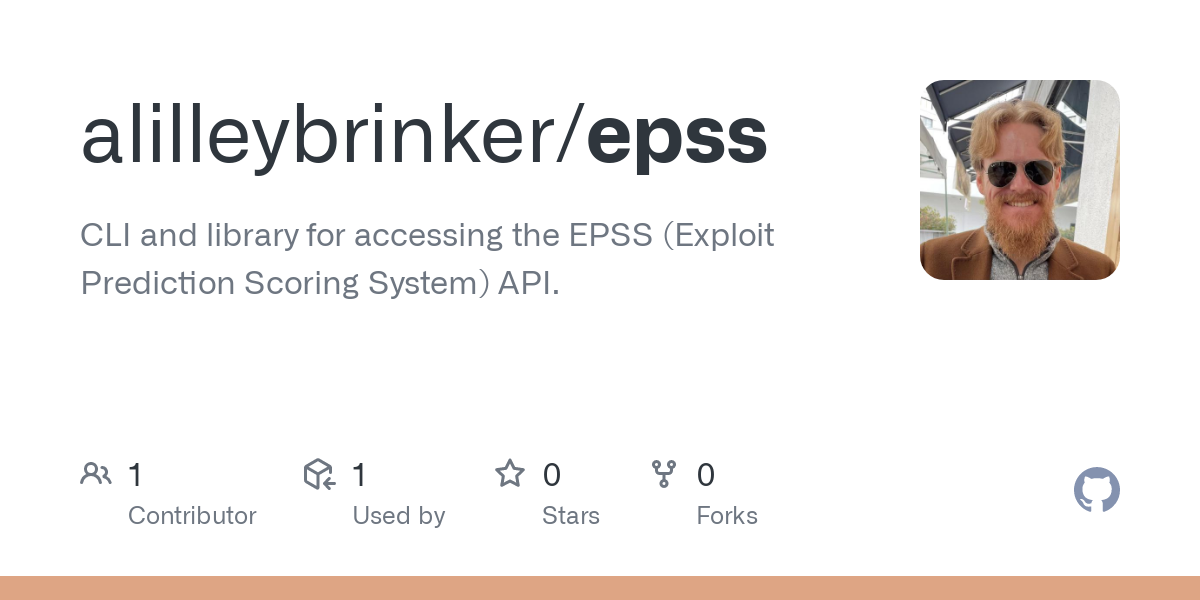 GitHub - alilleybrinker/epss: CLI and library for accessing the EPSS (Exploit...